Washington’s demands include expelling all Cuban personal, including doctors fighting COVID-19, and handing power over to the US-backed opposition.

The State Department released what it called its “democratic transition framework for Venezuela” yesterday; a 13-point plan for the removal of Nicolas Maduro and a radical overhaul of the country’s political system. The principal and most fundamental change Washington proposes is to “restore all powers to the National Assembly,” the one branch of government the right-wing pro-U.S. opposition coalition currently holds. This would place the entire country under the control of political groups that have not won a general election in Venezuela since 1993. 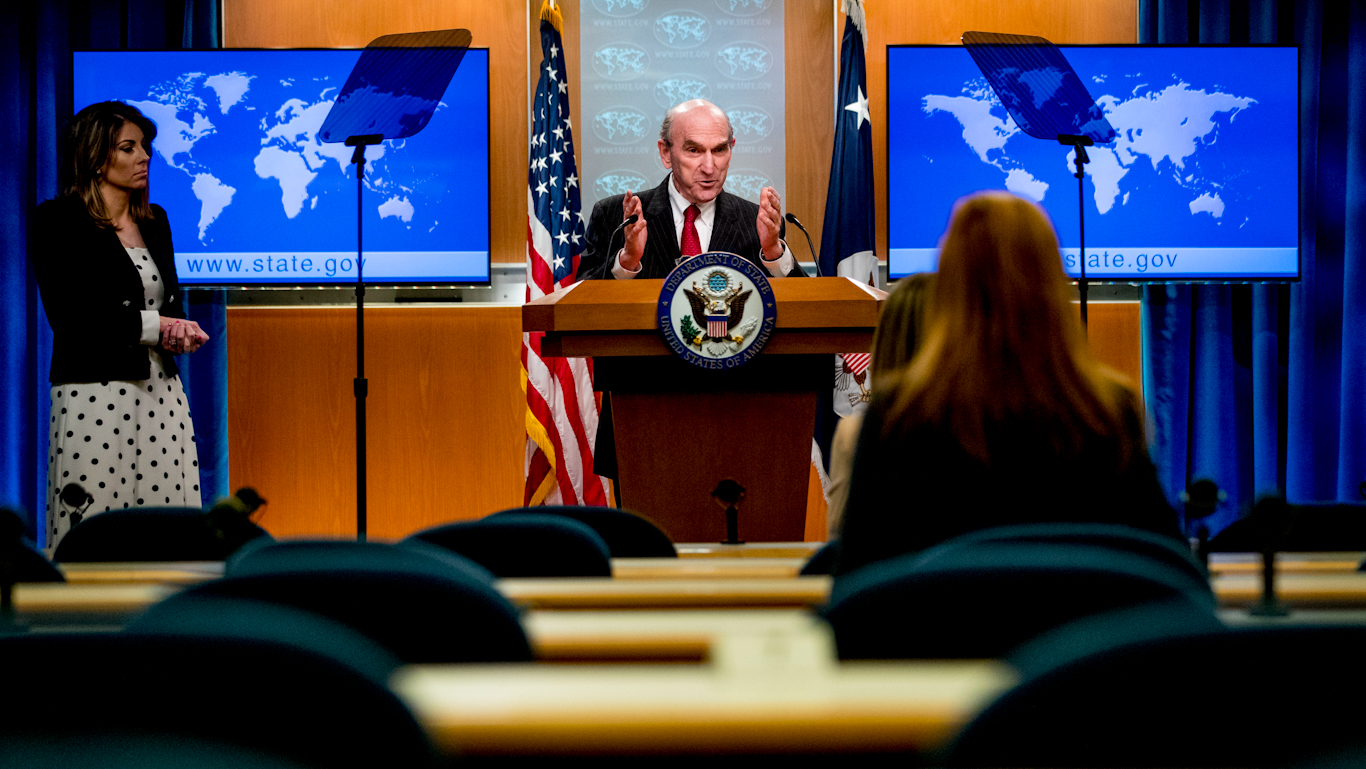 In point number three, the U.S. also demands that “all foreign security forces depart immediately.” Here, they are presumably not speaking about the U.S.-linked far-right Colombian death squads that have been known to penetrate the countries’ long and porous border, but about Cuban security advisors and medical personnel. The United States is currently waging a silent war against the Caribbean island, pressuring countries to refuse its medical aid during the coronavirus pandemic. U.S.-backed regimes in Brazil and Bolivia both expelled Cuban doctors from their countries upon coming to power, with Brazilian president Jair Bolsonaro claiming that they were “costumed doctors” who were there to “create guerilla cells and indoctrinate people.” Brazil’s Health Ministry is now asking them to return even as its president continues to deny COVID-19 is a serious problem.

According to the State Department’s transition plan, all political offices in Venezuela will be liquidated and their positions filled with people chosen by the National Assembly – i.e. the Venezuelan opposition. This includes the National Electoral Council, the Supreme Court, the Council of State and the presidency. The National Assembly has been in limbo ever since 2017 when the Supreme Court ruled it was in contempt of court. During the previous elections, a few new members of the National Assembly were tried for vote buying, but the institution refused to recognize the Supreme Court, instead demanding all power be given to it, hence the three-year-long constitutional crisis. Only after the National Assembly has handpicked the new Council of State, who, in turn, choose the president, will the U.S. begin to lift sanctions, the State Department claims. However, it promises, the World Bank, International Monetary Fund (IMF) and Inter-American Development Bank (all institutions that have attempted to overthrow the socialist government) will be there to flood the country with foreign loans. The IMF recently refused an emergency COVID–19 loan to Venezuela unless Maduro stepped down.

The American proposal is unlikely to attract interest from Venezuela. “It’s a little hard to see how this is going to be convincing to the major players in the government,” said David Smilde, an anti-Maduro academic at the Washington Office for Latin America. Steve Ellner, a government-sympathetic professor at the Universidad de Oriente in Puerto La Cruz, suggested that the IMF’s actions would only “add to resentment against Washington” worldwide, also noting that many in the opposition coalition actually favor dialogue and working with the government during the pandemic.

The American proposal has not attracted interest from the Venezuelan government, President Maduro dismissing it outright. While Maduro holds very low approval ratings, he was democratically elected in 2013 and 2018 in some of the most internationally monitored elections in the world. Around 150 foreign observers, including three teams of seasoned election officials who produced reports, watched the 2018 vote. Among them was former Spanish Prime Minister José Luis Rodríguez Zapatero, who said, “I do not have any doubt about the voting process. It is an advanced automatic voting system.” Former Ecuadorian President Rafael Correa agreed, praising its “impeccable” organization. In 2012 former president Jimmy Carter described Venezuela’s system as “the best in the world.”

Nevertheless, the U.S. government refused to recognize the results, imposing sanctions on the country. An American Special Rapporteur for the U.N., Alfred de Zayas, visited Venezuela and denounced them, accusing Trump of “crimes against humanity” and estimating that they were responsible for over 100,000 deaths. The international community has called for all U.S. sanctions to be halted.

After a series of secret negotiations, the U.S. government immediately backed self-declared president Juan Guaidó’s audacious coup attempts last year. Guaidó, head of the National Assembly, insisted that Maduro was illegitimate and he should be made president. While he was lauded in Washington, even receiving a standing ovation from both Republicans and Democrats at Trump’s state of the union address, his attempts were largely rejected by the Venezuelan public. The most recent poll showed him with a 10 percent approval rate and a 68.5 disapproval rating among his country folk. He was unceremoniously removed from his position as National Assembly chair by his own coalition in January.

The State Department’s most recent announcement is another in a long line of efforts by Washington to unseat the ruling socialist party – a chain of attempts going back to at least 2002. This was made explicit by special Venezuela representative Elliott Abrams: “The plan is not so much an effort to change Nicolas Maduro’s mind as it is to appeal to everyone else in Venezuela to change his mind for him,” he told a briefing. However, it is far from clear whether it will have this effect. Steve Ellner, a government-sympathetic professor at the Universidad de Oriente in Puerto La Cruz, suggested that recent actions would only “add to resentment against Washington” worldwide, also noting that many in the opposition coalition actually favor dialogue and working with the government during the pandemic. Like Mike Pence and Mike Pompeo’s previous calls for the military to rebel and overthrow Maduro, the State Department’s transition plan will likely be ignored inside Venezuela. With a global pandemic threatening to hit the country, Venezuelans likely have more important things to think about.

Alan MacLeodis a Staff Writer for MintPress News. After completing his PhD in 2017 he published two books: Bad News From Venezuela: Twenty Years of Fake News and Misreporting and Propaganda in the Information Age: Still Manufacturing Consent. He has also contributed to Fairness and Accuracy in Reporting, The Guardian, Salon, The Grayzone, Jacobin Magazine, Common Dreams the American Herald Tribune and The Canary.