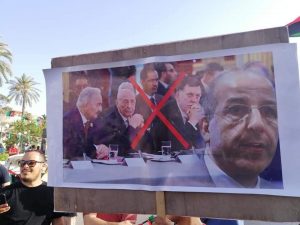 Libyans are demonstrating against all their failed political and ruling elite in the face of power and water cuts, fuel and liquidity shortages (Photo: Social media).

The internationally recognized Libyan government of Faiez Serraj, based in the capital Tripoli, is creaking under pressure of popular discontent as Libyans continue to see it as an ineffective government daily.

With reports that Tripoli-based militias aligned to the internationally recognized Libyan government breaking up demonstrations against the Serraj government by men, on Thursday night a small group of mostly women demonstrated in Algeria Square.

One over seventy-year old lady gave an interview to a local TV channel, usually with a supportive editorial line towards the Tripoli government, which touched a nerve amongst Libyans.

In a mature and considered tone of voice the lady beseeched the Serraj government to not ignore the people and do something about the standard of living crisis in the country.

With successive blackouts and 24-hour power cuts over the last week, Libyan youth have taken to the streets to demonstrate their anger, blocking roads and burning tyres. The tyre burning was partially in anger and partially to provide them with lighting during the extended power cuts.

The irony is that the failed Serraj government has recently resumed university exams and sixth formers are planned to start at the start of September. Students are encouraged not to mix socially with colleagues and urged to revise for exams remotely in their own family bubbles. They are encouraged to revise together in study groups using mobiles and social media – yet with extensive power cuts, this is impossible.

For even those who can afford a large family-sized generator that can run all day and can afford to order-in by phone the diesel to run it at LD 1.50-2.00 / litre, as opposed to the official price of LD 0.35 – can do nothing about operating the mobile phone masts for the needed phone and social media calls.

What has also touched a nationwide Libya nerve is the recent reports of increased Libyan youth now jostling with illegal African migrants to get on the so-called ‘‘death boats’’ to cross the Mediterranean to Europe. An unconfirmed report that at least one boatful of Libyans has capsized with all onboard lost at sea, has caused consternation.

It has, unsurprisingly, in this day and age, led to much social media soul-searching. The brunt of the anger has been directed at the Serraj government, but with the High State Council and parliament (west and east), getting their fair share of lambasting too.

All this with the spread of the Coronavirus in the country out of control. Yesterday, the number of cases passed the 10,000 mark.

People are encouraged to remain at home, but they complain that they need to visit banks to withdraw money, queue for petrol, diesel, cooking cylinders etc. But the banks have a cash crisis and people are forced to keep revisiting banks and queue for long hours – in case liquidity is made available.

The lady interviewed by the Libyan TV channel said they need cash to buy masks and gloves because of the Coronavirus – but the banks have no cash to give out. She said that life was becoming unbearable with Coronavirus, power and water cuts, cash shortages and uncollected rubbish on the streets.

With the war with Hafter looking increasingly over on a permanent basis, the Serraj administration has got no ‘‘we are at war’’ fig leaf to hide behind. His administration and its ineffectiveness have come into focus and under the microscope.

It will be recalled that the Serraj government is perceived as a government chosen by the international community with no local mandate or legitimacy. Legitimacy was meant to be gained through effectiveness and delivering services. However, its failure to solve even one of the myriad of problems of power and water cuts, cash liquidity, rubbish collection, insecurity, fuel and cooking gas shortages etc – has gained it no friends.

On a popular talk show on a local TV station yesterday, local municipality leaders waded into Serraj for failing to solve the electricity problem. They conveyed him as out of touch and insisted he either resolved the power supply problem through the local GECOL company within a short timeline, or purchase it from neighbouring Egypt, or through the hiring of temporary power generators installed regionally – doing away with GECOL altogether.