For the past 70 or so years, the US government waged a war against its own citizens, a reprehensible history of illegal, unethical and immoral experiments exposing countless US civilians to deadly procedures and pathogens.

According to a US Congressional investigation, by the late 1970s:

“at least 500,000 people were used as subjects in radiation, biological and chemical experiments sponsored by the US Federal Government on its own citizens”. 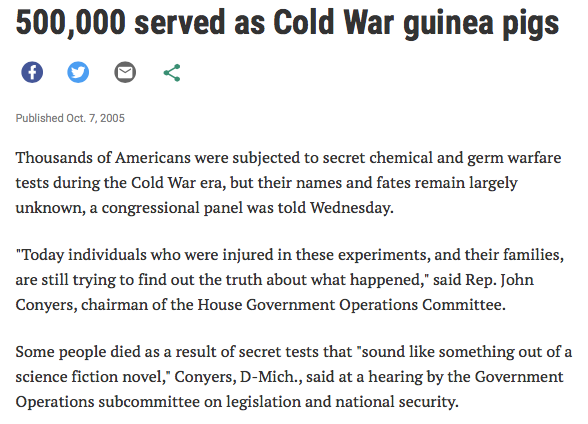 The United States Government Accountability Office issued a report on September 28, 1994, which stated that between 1940 and 1974, the United States Department of Defense and other national security agencies studied hundreds of thousands of human subjects in tests and experiments involving hazardous substances.

“Many experiments that tested various biological agents on human subjects, referred to as Operation Whitecoat, were carried out at Fort Detrick, Maryland, in the 1950s. The human subjects originally consisted of volunteer enlisted men. However, after the enlisted men staged a sit-down strike to obtain more information about the dangers of the biological tests. No follow-ups of note were done, nor were records kept, of the participants. The US military later claimed it had contact information for only about 1,000 of the original participants. [The] United States biological defense program contains scores of divisions, departments, research groups, bio-intelligence and more, by no means all related to “defense” in any sense.”

From the document: American nuclear Guinea Pigs: Three decades of radiation experiments on U.S. citizens: Report prepared by the Subcommittee on Energy Conservation and Power, of the Committee on Energy and Commerce, U.S. House of Representatives, November, 1986: U.S. Government Printing Office, Washington, 1986, 65-0190

“The human subjects were captive audiences or populations that experimenters might frighteningly have considered “expendable”: the elderly, prisoners, hospital patients suffering from terminal diseases or who might not have retained their full faculties for informed consent. … no evidence that informed consent was granted. … the government covered up the nature of the experiments and deceived the families of deceased victims as to what had transpired. … subjects received doses that approached or even exceed presently recognized limits for occupational radiation exposure. Doses were as great as 93 times the (maximum) body burden recognized”. The paper then proceeds: “Some of the more repugnant or bizarre of these experiments are summarized below.” 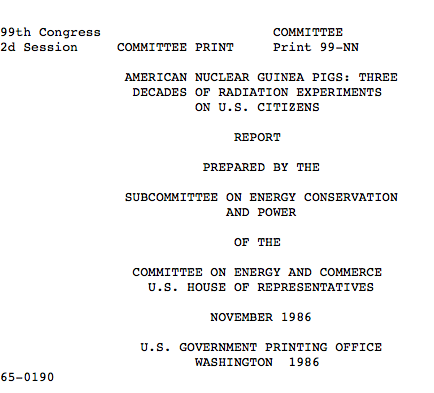 Few Americans seem aware of their own government’s programs of human experimentation, an unconscionable litany of atrocities performed by the CIA and military on an innocent and uninformed population, always without consent and most often with tragic results.

These included extensive programs of mind-control experiments, interrogation/torture experiments, deliberate infection with deadly or debilitating diseases, exposure to severe radioactivity and every manner of biological, bacteriological and toxic chemical pathogens. They encompassed brainwashing, torture, electroshock, nerve agents, drugs and exotic hypnosis and surgical experiments including lobotomies, and a wide range of pharmacological “research”, all conducted on innocent, uninformed and helpless civilian victims ranging from newborn babies to adults. 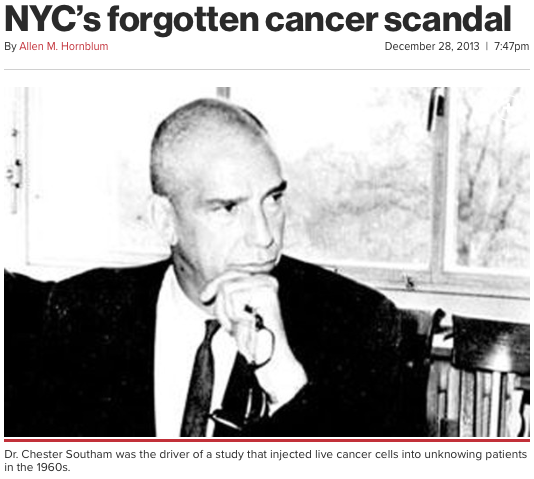 Experiments were performed on children, orphans, the sick and mentally disabled, prisoners who were given no choice in participation. Hospital patients were often told they were receiving medical treatment, but instead were used as subjects in deadly experiments.  (See Hornblum Allen M.; Newman Judith Lynn; Dober Gregory J. (2013). Against Their Will: The Secret History of Medical Experimentation on Children in Cold War America. Palgrave Macmillan. ISBN 978-0-230-34171-5)

We will never know the total number who died. If you don’t mind nightmares, do some research on the CIA’s MK-ULTRA program. Many of these experiments continued until the late 1990s and beyond, and many people claim – and provide evidence – that they still continue today.

Three days after his speech decrying Soviet tactics, Allen Dulles approved the beginning of MK-Ultra, a top-secret CIA program for “covert use of biological and chemical materials.” “American values” made for good rhetoric, but Dulles had far grander plans for the agency’s Cold War agenda.

MK-Ultra’s “mind control” experiments generally centered around behavior modification via electro-shock therapy, hypnosis, polygraphs, radiation, and a variety of drugs, toxins, and chemicals. These experiments relied on a range of test subjects: some who freely volunteered, some who volunteered under coercion, and some who had absolutely no idea they were involved in a sweeping defense research program. From mentally-impaired boys at a state school, to American soldiers, to “sexual psychopaths” at a state hospital, MK-Ultra’s programs often preyed on the most vulnerable members of society. The CIA considered prisoners especially good subjects, as they were willing to give consent in exchange for extra recreation time or commuted sentences. ( CIA’s MK-ULTRA program.)

These human research programs were funded by the US government and performed mostly through the CIA and the military, but with full cooperation from most major universities and hospitals. They were highly secretive, their existence undiscovered until after many years of operation. Faced with court orders to release the records, the CIA and military instead destroyed most of the documents, a few records surviving only by filing and communication errors, the available evidence covering only a minuscule portion of the violations and atrocities committed.

“From 1960 until 1971, Dr. Eugene Saenger, a radiologist at the University of Cincinnati, exposed poor and mostly black patients to whole body radiation. They were not asked to sign consent forms, nor were they told the Pentagon funded the study. Patients were exposed, in the period of one hour, to the equivalent of about 20,000 x-rays worth of radiation.”

Most of the patients died, but Dr. Saenger recently received a gold medal for “career achievements” from the Radiological Society of North America.

From the 1950s onward, mentally disabled children at the Willowbrook State School in Staten Island, New York were intentionally infected with viral hepatitis by feeding them an extract made from the feces of infected patients. Saul Krugman of New York University promised the parents of mentally disabled children that their children would be enrolled into Willowbrook in exchange for signing a consent form for procedures that he claimed were “vaccinations.” In reality, the procedures involved deliberately infecting children with viral hepatitis.

Lauretta Bender: The Psychiatrist From Hell. Lauretta Bender was a neuropsychiatrist at Bellevue Hospital in the 1940s and early 1950s who pioneered electroshock therapy on small children who inevitably regressed into violent and catatonic states, most ending dead or in prison. Bender later expanded her treatments to include LSD and, in spite of her inhuman brutality, the NYT published a glowing obituary when she died – as it did for the many dozens of such persons.

Beginning around 1950, the US Army conducted at least 240 open-air bio-warfare attacks on American cities, releasing deadly nerve agents and bacteria from Alaska to Hawaii. The CIA released whooping cough bacteria from the sea near Tampa Bay, Florida, causing an epidemic that left tens of thousands of people extremely ill and killing many others. The US Navy simulated biological warfare attacks by spraying large quantities of a bacteria over San Francisco, in which many citizens died and countless contracted severe pneumonia-like illnesses. When the information was leaked, military sources insisted the bacteria were harmless, but countless thousands incurred serious urinary tract and respiratory infections, pneumonia and other illnesses, infections which were permanent: “To this day, these bacteria are a leading cause of death among the elderly in the San Francisco area”.

The US military conducted around 1,000 above-ground nuclear tests to determine the effects of radiation on a population. The Public Health Service was instructed to tell citizens downwind from nuclear bomb tests that the increases in cancers were due to neurosis, and Eisenhower ordered that women with radiation sickness, spontaneous abortions, hair loss, leukemia and brain cancer be told they were suffering from “housewife syndrome”.

“It is desired that no document be released which refers to experiments with humans that might have an adverse reaction on public opinion or result in legal suits. Documents covering such fieldwork should be classified Secret.”

An indication of the callous and obscene nature which has always pervaded the US government:

Kodak began receiving customer complaints about fogged film, the cause traced to packaging material – Indiana corn husks contaminated with radioactivity. The US government secretly agreed to provide Kodak with advance information on all future nuclear tests, including “expected distribution of radioactive material in order to anticipate local contamination”. The victims now tell us, “. . . the Government warned the photographic industry and provided maps and forecasts of potential contamination. Where were the warnings to parents of children in these areas? The Government protected rolls of film, but not the lives of our kids. Why did they do that when they had all the information about hot spots and fallout, and yet they did not warn the people of this country about the dangers inherent in radioactive fallout?” Their government didn’t tell them because they were the guinea pigs in the tests.

And it wasn’t only War on America

The accumulated evidence of the American use of biological weapons in China and North Korea is beyond dispute, but the US government has lied about it for 70 years.

It is also documented beyond dispute that the US conducted a decades-long campaign of biological warfare against little Cuba, including the distribution of hemorrhagic fever, and the swine flu that caused Cuba to kill all 500,000 pigs in the country. The Americans not only lied about this for 70 years but accused Cuba of being “a pariah state” with a biological warfare program. (1)

And not only Cuba. The US has deployed Chemical and Biological weapons on Canada, the Philippines, Puerto Rico, Colombia, Vietnam, China, North Korea, Vietnam, Laos, Cambodia and more.

Larry Romanoff is a retired management consultant and businessman. He has held senior executive positions in international consulting firms, and owned an international import-export business. He has been a visiting professor at Shanghai’s Fudan University, presenting case studies in international affairs to senior EMBA classes. Mr. Romanoff lives in Shanghai and is currently writing a series of ten books generally related to China and the West. He can be contacted at: 2186604556@qq.com. 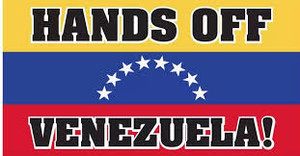 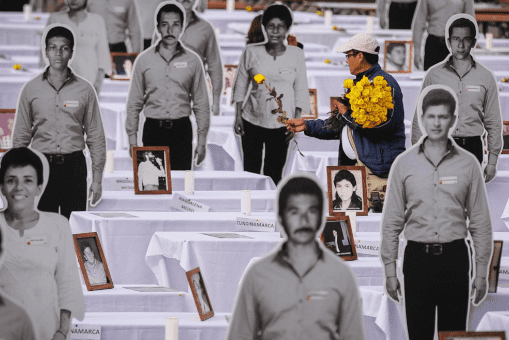